Due to family matters I am currently in France away from my workshop and tools. Aside from swinging the odd axe and hatchet for the log burner, I have been a completely woodworking free zone for three weeks!!!

However ... with lots of free time to spare I have been doing a lot of internet reading and learning! The new 'buzzwords' floating around my head are Timber Frames & Green Oak, and Chainsaw Milling. Objects of desire now include such things as Robert Sorby 1, 1.5 & 2 inch chisels and 2 & 3 inch Slicks. Gransfors Bruks Draw Knives and Froes, and Wetterlings  Axes.


While the timber is less than straight and quite knotty, its (hopefully) perfect for me to build my long awaited saw bench. I have been wanting a decent saw bench for ages to cut stock to rough length outside using my panel saws.  It will also serve to chop mortises on while sitting down and as a 'workshop stool'.

Some online research led me to the following sources of information: here, here and here .

I figured I would follow the same basic traditional design using slightly different joints and measurements with the entire thing made from 2"x2" timber. The whole project is basically an exercise in precision sawing practice, thank god for my new tenon saw.


While the saw bench is a tool, I wanted to approach it almost as if it were a piece of furniture to improve my overall skills. Generally people talk about 'knocking together' a quick saw bench but this project took me a few days mostly because I was taking my time to do things right. I can see why nearly all hand tool woodworkers end up building their own Roubo style work benches, this saw bench is like an insight to what might be involved on a (much) smaller scale. 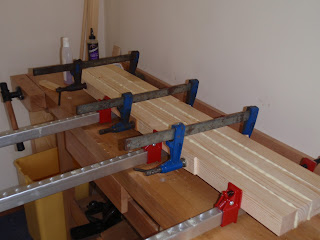 Edge jointing the four 1m lengths to make the top - lots of 'squeeze out'. I'm using PVA glue (again) as its likely the saw bench will see some use outdoors. 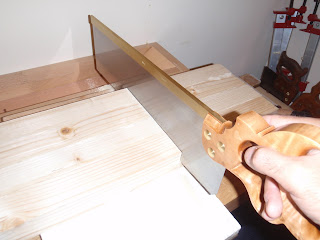 The next day, after the glue had dried I found a short crack in one of the pieces probably caused by the wood moving in its new climate and being glued, I guess something had to give. I cut and squared off the end back to good wood leaving just over 30" - plenty long enough. 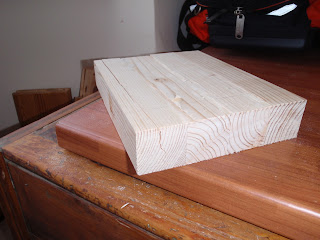 The cut off waste piece showing the crack that developed after gluing up the top. I should have waited a week or so to let the wood become acclimatised with it now coming inside a heated house from outdoors at the wood yard. 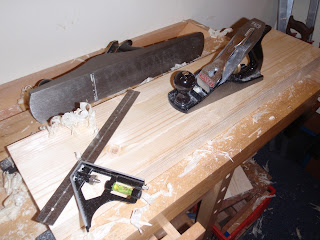 Flattening the saw bench top using my no#6 and no#4 bench planes, across the grain, diagonals and lastly with the grain. I will do a final smoothing once the bench is assembled. 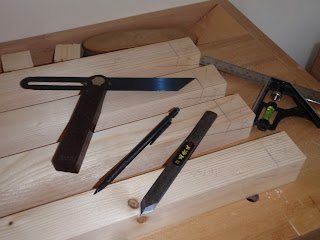 After cutting four 22" long pieces for the legs, I set my bevel gauge to 100 degrees to give the legs a 10 degree angle and marked out the joinery where the saw bench top will sit. 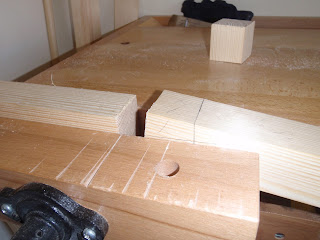 Placing the piece in the vice at an angle so that the saw stays 'plumb' while sawing the angled cut. The piece of wood in the vice to the left is to stop the vice racking. Remember to save the waste pieces for the bench top glue up. 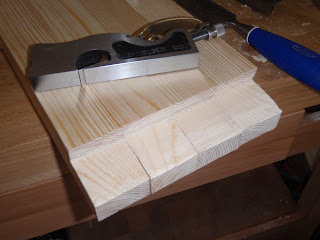 Using my new 1.5" chisel and shoulder plane to clean up the  angled shoulder joints. 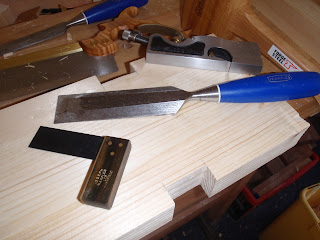 The saw bench top joinery for the legs. 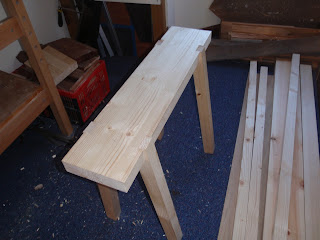 First dry fit of the legs - it's starting to look vaguely like a saw bench. Later I will need to plane down the saw bench top to allow the legs to sit flush. I should have cut longer (deeper) joints in the legs. I am kinda making up the measurements as I go along - doh! 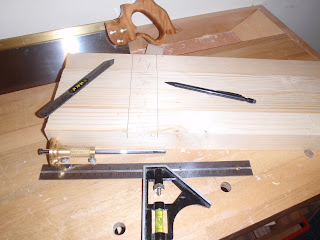 Marking out a recess in the legs to accept a lap jointed stretcher. 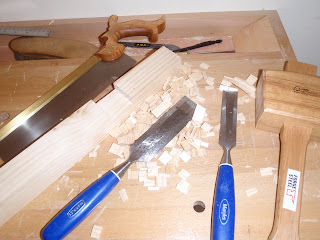 The sides of the recess are sawn and the waste chiselled out. Those 'new' chisels I rescued last week are already earning their place in the toolbox. 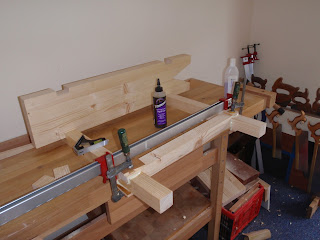 Glueing the leg stretchers, the saw bench top is used to ensure the leg assembly remains square. I had also earlier cut the 'ripping notch'. Unfortunately, this difficult cut was longer than the 4" deep blade of my large tenon saw so I had to resort to my pullsaw for the final inch or so. 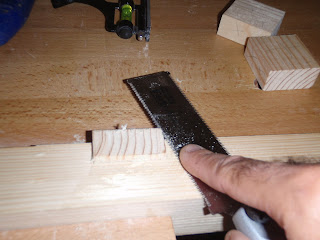 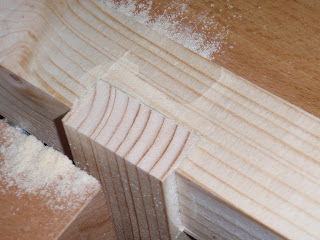 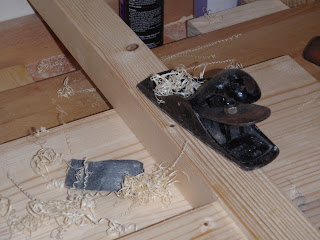 Using a block plane and sand paper to break all the corners and remove all the glue and pencil marks. 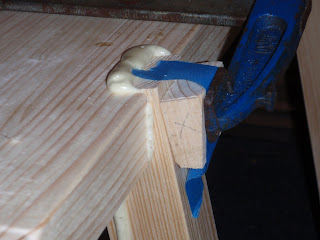 Using the waste pieces from the leg shoulders to aid the clamping process for gluing up the  saw bench top to the angled legs. 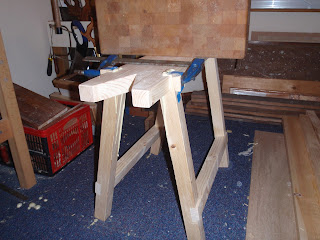 One clamp for each 'pair' of legs and a large heavy butchers block for some extra weight and left overnight to cure. 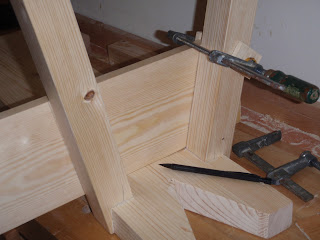 At this stage my plan to build the saw bench entirely from 2"x2" timber changed. I had a 5 1/2" piece of Pine absolutely perfect for the upper leg braces. Oh well 'best laid plans and all'... Marking out the leg angles. 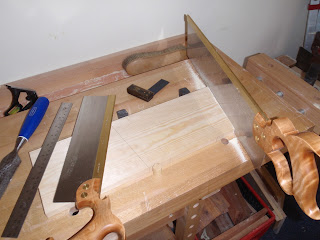 Despite this being a crosscut, I found it easier, faster and more precise using my large Tenon saw, I guess the 5 1/2" board is slightly too wide for the 11" blade of the carcass saw. 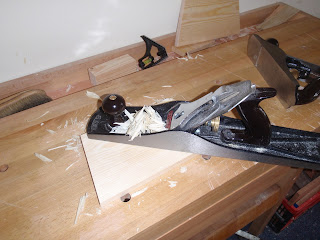 Using bench planes to remove cupping from the upper leg braces. I only bothered with the side that mates against the legs. 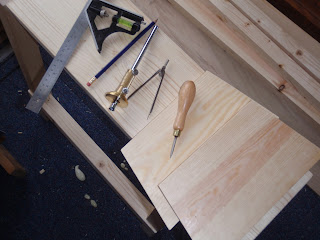 Laying out the screw holes. Six scres per brace, three holes per side. Half the leg thickness (1") from the top and bottom and in from the side. The third hole is exactly between the top and bottom ones found using deviders ... a lot of effort but 'first bite is with the eye'. 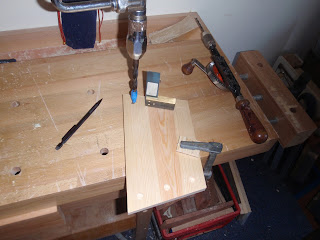 Using my brace to very carefully and slowly drill the counter sink holes for the screw heads followed by the pilot holes with my hand drill. 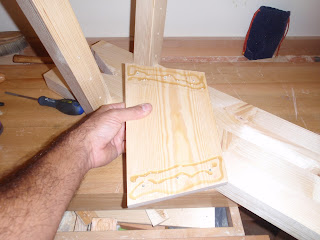 A smidgen of glue to make it bomb proof! 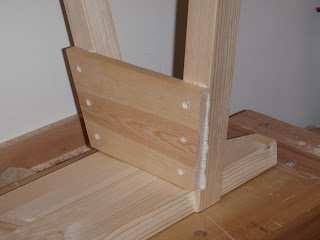 Leg braces glued and screwed - yet more squeeze out to clean off. 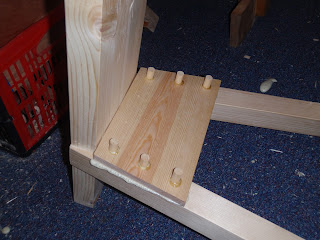 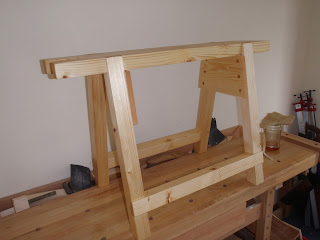 A final light sand to remove excess glue and a coat of boiled Linseed oil - Done! 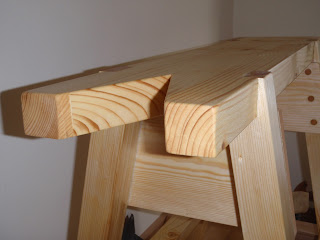 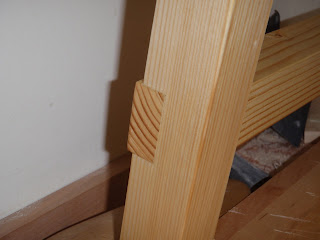 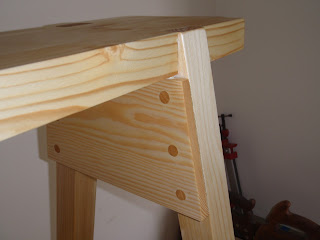 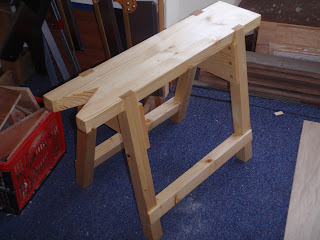 Saw bench trimmed to height using my knee as a gauge with 10 Degree angle on the leg bases so each leg sits flat.

At this stage the saw bench is basically complete and functional. I might later put screws in the saw bench top joints and also in the stretchers, but I'm hoping the glue joints will be strong enough. Also a 3/4" hole for a holdfast might come later.

I have to say despite the time involved, considering a saw bench 'should' be a simple project, I really enjoyed making it and once again learnt a hell of a lot. Especially as a lot of the mark up and cuts were not at the standard 90 degrees. This project felt like real old school traditional wood working, almost a right of passage!

When I first started this blog only a short while ago I decided to buy a beginner bench as I didn't think I would be able to build my own. This saw bench build has certainly got me thinking ... and with my increasing skill level ... who knows my very own Roubo workbench may not be that far away....

Having just (07/2011) returned back to the U.K. to 'settle down' after a few years sailing around Europe and in the Caribbean, I now find myself in an ideal position to take up woodworking as a hobby.
Not being a previous home owner or DIY fanatic my current level of woodwork experience is practically zero. However, being a wooden boat owner, I have been recently required to make the odd small repair.
I 'inherited' a small number of tools that came with the boat and I also purchased a very small number of woodwork specific tools myself for maintaining the boat. All these tools are hand tools with a view to being able to make repairs anywhere in the world possibly at sea without electricity.
Now I have a permanent base to work from it's time to learn some proper skills and maybe even make something!