My first post of 2012 and I'm already breaking my 'Work with more hard woods'  New Years Resolution. OK - I'm not breaking it literally but it seems very likely given what's posted below...


We (the girlfriend and I) have been discussing having some raised beds in the garden to grow vegetables for some time and with wood being expensive - a lot more expensive than vegetables anyway, the whole project seemed like a waste of time and a false budget.
Until I found an advert on Ebay selling 13ft long x 225mm wide x 36mm thick scaffold boards at £200 for 25 boards. That works at just over £2 per meter! According to the dealer it's Scandinavian Redwood - to me it's Pine!


The wood I used for my large coffee table top (also Pine) of almost exactly the same dimensions cost around £12 per meter!


So, the 'plan' is to build some things to sell and thus (hopefully) get the wood for the raised garden vegetable beds for essentially free. I might even make some money in the process! - At least this is in the right direction for my other resolution - 'Sell some of the things I make'.


Anyway - The work began when the flat bed truck arrived and unloaded the boards on the driveway. 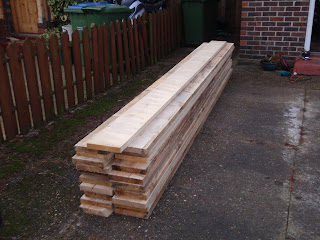 Somehow the stack of wood looked a lot bigger than what I was imagining! Nevermind using hand tools, out came an old jigsaw! I saved about 7 out of the 25 boards that some showed signs of cracking to be used in the garden at full length. 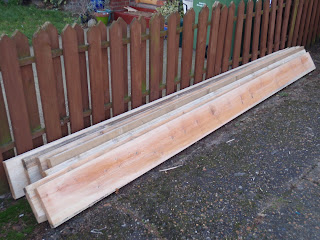 Leaving me with this pile (below) of 6 1/2ft long boards, that now had to be carried to the garden shed to keep it dry. And you think you have timber storage issues!!! 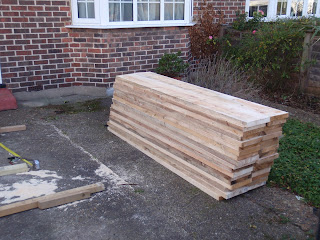 A few of the planks were quite wet as its been stored outside in a wood yard and obviously been recently rained on so I will let it dry out for a while before attempting to use it.

Email ThisBlogThis!Share to TwitterShare to FacebookShare to Pinterest
Labels: Random

Looks very similar to my pile of "workbench to be" wood. My sympathies to your back. I try not to think about the fact that the initial stacking was only one of perhaps 8 cycles of lifting, carrying, and restacking.

Having just (07/2011) returned back to the U.K. to 'settle down' after a few years sailing around Europe and in the Caribbean, I now find myself in an ideal position to take up woodworking as a hobby.
Not being a previous home owner or DIY fanatic my current level of woodwork experience is practically zero. However, being a wooden boat owner, I have been recently required to make the odd small repair.
I 'inherited' a small number of tools that came with the boat and I also purchased a very small number of woodwork specific tools myself for maintaining the boat. All these tools are hand tools with a view to being able to make repairs anywhere in the world possibly at sea without electricity.
Now I have a permanent base to work from it's time to learn some proper skills and maybe even make something!